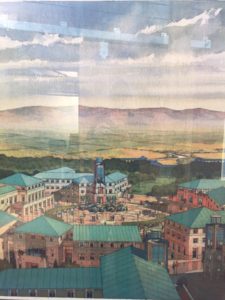 UCMBEST is a regional economic development opportunity on former Fort Ord lands now owned by UC Santa Cruz, within the jurisdictional boundaries of the City of Marina and the County of Monterey. The UCMBEST vision is focused on developing collaborative research-business opportunities for the Monterey Bay region. The central component of this vision is the development of a new research and technology center, as well as other job-generating uses, on approximately 400 acres of land acquired by the University of California on the former Fort Ord. UC Santa Cruz owns another approximately 600 acres managed by the UC Natural Reserve System as open space habitat known as the Fort Ord Natural Reserve. 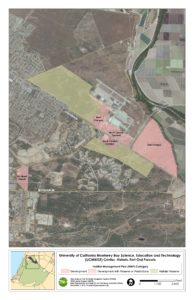 The UCMBEST development parcels include approximately 400 acres of land broken up into 5 segments:

Each of these segments has a unique intended use following the most recent 2011 UCMBEST Visioning Process and subsequent UC actions. Following the publication of this report and in conjunction with regional partners including the Fort Ord Reuse Authority (FORA) and the County of Monterey Economic Development Department, UC is taking active steps to move ancillary parcels to market and realize the original R&D vision for the Central North 70-acre parcels.

Check back to this page frequently, as UCMBEST related content will be continually updated. If you have questions about any given parcel or the project in general, please contact Josh Metz, FORA Economic Development Manager, or Steve Matarazzo, UCMBEST Planning Director.